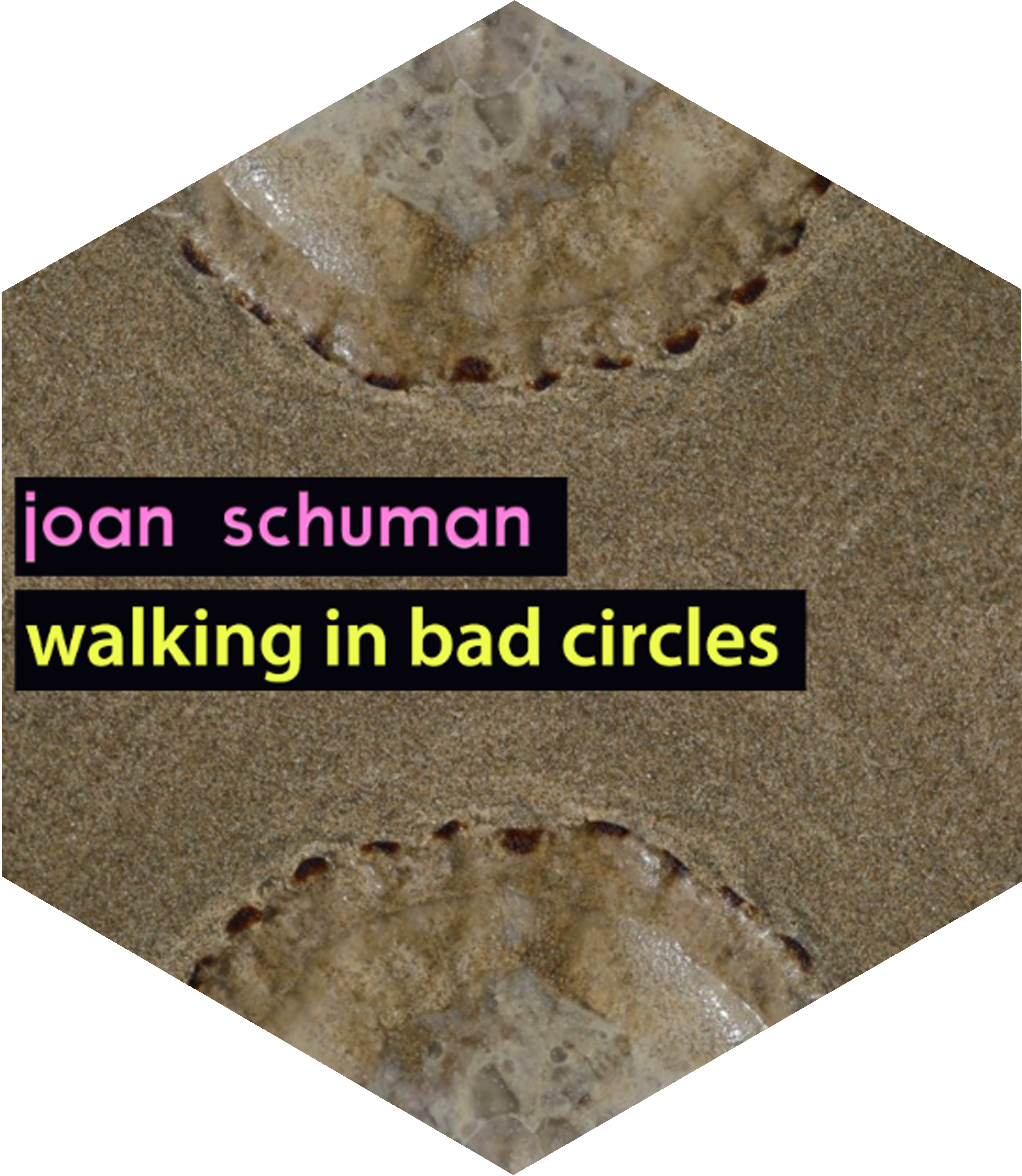 Walking in Bad Circles was written and produced by Joan Schuman. It is part of Travels in Stasis, a radio-art series created by Joan Schuman when she lived in the U.S. Southwest in the early 2000s. It’s a multiple trek that follows the nomad’s movements around walled cities and deserts reaching the sea, through the uprooted mind. Presented individually or as a whole, this themed project has been heard across radio installations in museum exhibits in Los Angeles; in media arts festivals in Australia and Canada, France and Spain; on the air on NPR, ResonanceFM and FBI Radio in Sydney; and more recently, on podcasts featuring adventuresome sound and stories.

When I read a story in the back of the newspaper about a young man who had wandered across the U.S./Mexico border, I became curious about what his experience must have been like. I imagined how he might wander through his mind, talking to no one in particular, remembering his town, his mother, and the things he heard and saw along the way—how he kept repeating that he was ‘walking in bad circles,’ as if any of us walk a linear, knowable journey.

As often happens, I might have had the sounds long before mixing them with story layers. I’m not sure how long I had field recordings of freight trains rumbling through the urban desert where I was living at the time, and a surreptitious recording of my neighbours blasting ranchero music while playing an afternoon game of horseshoes. Did I read about the young man found wandering in the desert metropolis, tossing rocks at a police car, before I had these recordings?

I think it was all of one period where I was collecting the audible traces of the desert, paying attention to experiences along this border that is so keenly present and easily ignored. What struck me was a single line from that news item, the allusion to the wanderer’s shaky mental state: “I’ve been walking in bad circles.” What are ‘good’ circles? A straight and linear walking?

It seemed to reflect more broadly, whether staying put in the geography we’re meant to be in or just traveling through briefly. We might, at some point, be journeying in round-about ways that aren’t always meaningfully evident.

By weaving what I could imagine this young man speaking—in both English and Spanish—to his mother, to the stars and the moon, and without overt translation, was a way to give a sense of movement across all kinds of borders: geographic and cultural, physical and emotional.

Inspirations from inside the world of radio and sound:

Everything translated into English by the German fiction writer, Jenny Erpenbeck: she creates sound pieces in her novels—sounds and voices and stories are gorgeously, profoundly woven.

This piece has a maze-like quality both sonically and structurally. We follow the narrator as he drifts past a dreamy landscape of trains and chatter, with the distinct sense that he isn't headed anywhere in particular.

We love in this piece the richness with which Joan has rendered the idea of aimlessness, as well as her pacing between English and Spanish, which helps listeners practice taking in narrative audio without an assumed destination of clarity or comprehension in mind.

Joan Schuman has been making sound works for radio since the late 1980s, including presenting other sound artists on the air and in art galleries, beginning in the late 1990s.

Her engagement with practitioners naturally continued online as guest curator/producer on Trickhouse in 2013 and again in 2014, and eventually, in her founding Earlid in early 2015. She conceives and creates quarterly exhibits of adventuresome listening, offering contextualized essays, sonic portraits and dialogues with practitioners, and open submissions once annually.

In 2017, Joan co-moderated a 10-person online forum with radio artist Gregory Whitehead, hosted at Earlid, exploring the legacies and contemporary stance of radio artistry, along with engaged comments from 20 participants. During the Winter of 2018, Earlid is exploring two artists working in sonic transmission technologies as they consider environmental ruin — as activist witness and intruder. She produced another series of audio remix/portraits of one of the artists, Anna Friz, with sounds Friz collected around the Chilean desert’s extractive industries.

Since 2004, Joan has been teaching online courses in the art of radio experiments and theories and history of sonic culture via The New School for Public Engagement. She lives along the coast in California.